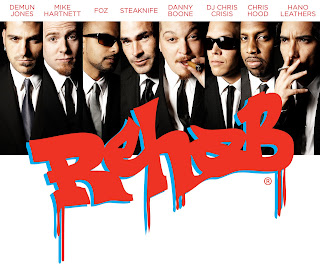 There's no particular way to describe the music of Rehab - even front man Danny "Boone" Alexander doesn't have the words for this amalgam of southern-style rock, rap, reggae and some country - all originating from the little town of Warner Robins, Georgia.

"It's really a mash-up of everything," said Alexander. "There's really no boundaries on this at all. You just do what feels good and try to make good songs."

One of their songs, which was written more than 10 years ago, has become a cultural hit. "Bartender Song (Sittin' at a Bar)" can be heard not only on rock and country radio stations around the country, but at many nightclubs and bars. It is also widely used in the cell phone ringtone community.

"It's crazy," commented Alexander, who possesses a thick southern accent. "Of course I never knew it was going to be a hit like that."

Alexander said a friend by the name of Cody Chestnutt wrote the hooks to the song and Jason Brooks did the rapping.

"Cody came in with the guitar line and hook written and asked me about it," he said. "I loved it and actually sat down and wrote the singing verses in a matter of 10 minutes. I knew the story. It was pretty simple."

For those living under a rock and don't know the song, the story described in the chorus has him sitting at a bar on the inside, waiting for a ride on the outside while lamenting the woman who stole his heart in the trailer park, so he jacked the keys to her daddy's freaking car and crashed that piece of crap and just walked away.

If the chorus doesn't ring a bell, maybe you may know the beginning when Alexander sits at a bar and speaks to a bartender telling them he broke his parole to have a good time but when he got home at 6 a.m, the door was locked and had to kick it in.

"You dabble in the wrong things long enough, you can easily tell that story," said Alexander.
"You shouldn't dabble in wrong things to get a song though," he laughed. "It's not a true story, let's say it's a typical story."

The song was originally released in 2000 off Rehab's album, Southern Discomfort, which was just he and two friends, who called themselves a rap group.

"I was going through a tough time with bankruptcy and other stuff," said Alexander. "I thought "man, I need to put a band together and try to make some money."

He grew up around music as his mom listened to disco and his dad preferred country. By the time he was in high school, Alexander loved, as most high school guys do, hip-hop.

"You know I was rapping in the hallways at school so I thought I could do it," he said.
But it took some rough times for him to get down the path of success. After being locked up in Butler, Georgia, Alexander moved to Atlanta to get away from his immediate surroundings, but still managed to find more trouble.

"Me and a friend started going to anonymous-type meetings," he described. "We met another guy there and we started a group called Rehab. It was something we all had in common at that moment."

Years later, the three split up but Alexander didn't quit. He returned in July of 2008 with a new group of bandmates including Mike Hartnett, who had worked on projects with Pink, Outkast and Fergie.

The group then re-recorded "Bartender Song" in 2006 and re-released their album, "Graffiti the World" and Universal Records scooped them up.

A video to the song was shot last year in which Hank Williams Jr. sang a chorus to the song. The video was a nominee for Wide Open Country Video of the Year at the 2009 CMT Music Awards.
"It's a wonderful feeling, especially to get a chance to win the award and just getting to go to the show," said Alexander. "We just want to go out and tour and play good music. There's not much more we want to do."